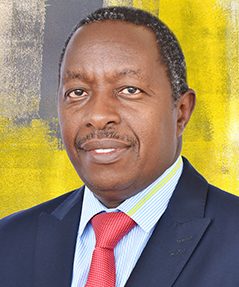 Mr. Chege Thumbi’s career spans over twenty years across multiple fields in the banking sector. He is an electrical engineer by profession.

Mr. Thumbi is the current Chief Executive Officer of Sidan Bank where he has grown the Trade Finance business by over 600% and Digital Banking and FOREX income lines. This is in line with his vision of steering the Bank towards becoming a Tier 2 Bank by 2019.

His previous role was Chief Executive Officer of Credit Bank, an organization that he steered to success despite a very challenging operating environment. He joined Credit Bank in May 2015 as CEO and has been instrumental in the total transformation of the bank. His leadership saw Credit Bank ranked as the Best Bank in Trade Finance in the 2016, Think Business Banking Awards, amongst other achievements.

Mr. Thumbi also held the role of Director Technology & Operations at NIC Bank (group) for a period of 4 years where he sat in the Board Executive, risk and audit committees. He steered the implementation of T24 across the three East African Countries that transformed the bank through creating high efficiencies in shared services. He was credited for the retail expansion from 13 to 24 branches and introduction of channel and technology based solutions such as mobile application and internet banking. Additionally, he streamlined credit operations and debt collections with major reduction in provisions and turn-around time. He left NIC Bank in 2014 and had a brief stint at Chase bank as group technology & Operations director.

In his role as the Director, Service delivery, Change and Technology at Barclays Bank, he was the key lead and accountable executive in implementation of mobile banking, key lead and sponsor of Flex Cube implementation and rationalized various operations whilst centralizing others.

He also oversaw over 117 branches countrywide in Kenya and also managed the Ghana operations as the Acting Chief Operations Officer from 2008 to 2010.

Prior to joining Barclays Bank, he was the General Manager, Service Delivery, Technology & Operations at Commercial Bank of Africa as from 2005 until 2008.
He played a key role in implementation of T24 core banking system, successful acquisition and integration of FABK, harmonization of the bank’s services and products which led to better customer experience amongst others.

Mr. Thumbi has also held several leadership positions at other institutions such as ABN AMRO and Citibank.

We use cookies to provide you with the best possible user experience. By continuing to use our site, you agree to their use. Learn more